Looking to plant power to the ground, reduce drivetrain slop, drastically lessen wheel hop, all while adding minimal NVH? Look no further, Damond Motorsports has the answer in the DM Side Motor Mount Combo for the Mazdaspeed3.

The Damond Motorsports PMM/TMM design:
-The bushings are orientated properly to support the motor and absorb vibrations across the whole bushing.
-This allows us to use stiff bushings without increasing NVH to unbearable levels. Orientating the bushing carrier in a transverse manner further reduces NVH, as less stress is put on bushing flanges.
-Full length welded steel bases, and top PMM/TMM pieces.
-CAD designed, and FEA, and street/track tested. You can't make enough power to break this thing.

No more wheelhop! The engine is kept thoroughly in place, and all this goodness with minimal NVH. I have a CS stage II RMM, and with the Damond TMM and PMM, NVH actually went down! Also shifting has a better feel to it and has become more accurate. I'm a very happy panda! Thank you for a very well designed product.

Drastic difference. Get more of a “car feel”

They shipped quicker than I expected! The look great and work amazing! Super easy to install, didn’t tale long at all! Highly recommend buying them!

Love them, good quality, easy to install and works great. Car feels more solid now and vibrations aren’t bad at all, not to mention not having worry about the stock pmm blowing out and shooting hydraulic fluid everywhere. Definitely recommend! 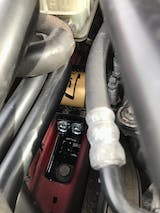 B
B.H.
Great mounts just give them time to break in

I installed both driver and passenger mounts at the same time. My rear mount is a e-focus mount, may get the Damond later on. Install was easy and only took about 45 mins or so. I’m a auto tech so I had all the right tools on hand. The vibes wasn’t that bad, some at start up and while starting off in gear but none really while moving. The noise on the other hand was horrible. I think the transmission mount is the noisiest of the two. I heard nothing but gear whine,bearing noise and lots of clutch chatter (solid flywheel) mostly in low gears. I was starting to wonder if I was going to be able to handle the noise being a daily driver and everything sounding like it was falling apart. I decided to give it some time to put some miles on the car and see what I thought after. It’s been only about maybe 400 miles and the noise has been cut in half. I don’t really notice it anymore and I think it will get even better over time. These are very well made mounts and I don’t see them going bad anytime soon. It’s a good trade off for no more torque steer, better shifting and an all around solid feel just to deal with being a little uncomfortable while they break in.