The Damond Motorsports Full Motor Mount Set is a must have for any Mazdaspeed3 enthusiast looking to keep their powertrain solidly planted while adding less NVH than the competition.  Damond Mounts are ran on the quickest 1/4 mile record setting Mazdaspeed3s, as well as many enthusiast's daily driver Mazdaspeeds.

I've had two Mazdaspeed 3 Gen 2s in my life; one a 2011 Tech, and the current 2012 Tech; and I've done motor mounts on both. However, the 2011 was just the rear mount and I didn't even know about Damond back then so it was a Cobb unit, and it definitely helped with keeping everything feeling more planted but it pales in comparison to the full Damond set.

Initial impressions were as expected with running full Race inserts with the normal amount of increased noise and vibration before everything bedded in, and now with around 400 miles on the car since install they've quieted down a good bit.

The whole front end feel completely solid now, and my only issues are from increased power causing torque steer which I will be correcting with new bushings soon enough (also available from Damond...check em out!)

I'm running a CST4 with some additional supporting mods and putting out an estimated 300-330 at the wheels, and the only weak link in the front end at this point is the OE suspension components.

The engine DOES NOT MOVE. These mounts do exactly what they say they'll do and quite frankly the amount of noise they cause isn't even really noticeable on my car with the additional exhaust note already generated from my other mods (Cobb catted DP, external WG, etc.)
Personally I do hear a light rattling at idle but it fades out once you're driving normally, and I cannot honestly say if it's from the mounts or if it's clutch chatter from the 6-puck, but either way it isn't bad.

All in all if you're looking for a way to pretty much immobilize your engine without going to a full set of solid mounts, this is the route to go.

Can't wait to get the rest of the car dialed in to really take advantage of these awesome mounts!

Another well made product.

These things are solid the motor can barely move, no more wheel hop and the torque steer is gone, they are a little noisy but they either break in or you get used to it.

The mounts were super easy to install, Directions on Damond Website were well written. I haven't noticed much NVH, am happy with the purchase! 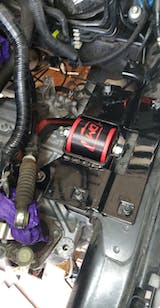 B
Bailey Garwood
Haven’t used them yet

M
Moses Henriquez
Another Happy Customer, Nothing more to say.

Well let me start off by saying that these motor mounts are amazing. At first the vibrations were intense but, now that I’ve driven about 200-300 miles. The vibrations are minimal. Maybe it’s my body getting adapted and the break in period but, I feel like it a little more vibrations than stock. I’m sure the vibrations will dial down even more. I’ve heard that by the time they have 1000 miles on them. They are fully broken in. So we’ll see. As of right now, I’m happy with the vibrations and wouldn’t go it any other mounts. In terms of performance. I immediately felt the responsiveness of power to the wheel. I have tried to make the car wheel spin and it’s very hard to. Even at launch I haven’t had wheel spin. I highly recommend this product. Just get the whole set and suck up the vibrations for the first couple hundred miles and then your golden.