The Damond Motorsports Power Steering Cooler Kit, for the 06-07 Mazdaspeed6, is ideal for lowering power steering temperatures on the track and the street. Our Power Steering Cooler Kits utilize a stacked plate cooler design, over a tube and fin design. The stacked plate cooler design can provide more effective cooling with a smaller sized cooler, and it is more durable, compared to tube and fin design coolers. During our testing, on a smaller cooler (50% less surface area than the coolers in the kits), we achieved 15-25% cooler fluid temperatures, depending on the air flow to the cooler.

I bought this cooler to replace the stock cooler that had corroded and started to leak. The unit is well made and was easy to fit using the instructions provided (note: it can be fitted without removing the airbox resonator if you prefer to retain it) and I was able to buy it and have it shipped to the U.K. faster and at a significantly lower cost than the stock part from Mazda. 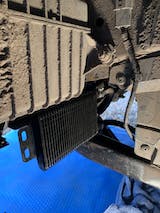 My old power steering cooler was not only rusted and falling apart it also started to leak. After a quick search I realized the cooler and hardline will be quite an expansive fix. That was until I saw this power steering cooler kit. It is great quality and a very affordable way to fix a leak in your power steering system! And since my car sees occasional track use the lower oil temps are a plus as well. 100% would recommend this kit. If you have little experience working on your car it shouldn't be too hard to install with a few hours with some basic hand tools. The write up installation instructions had some great reference points for the installation.

Definitely a great product. Easy to install, my only issue is there should be another bracket to hold the other side of the cooler. Other than that pretty good. Love the customer service they looked out for me so much when fed ex stole my package and said it was delivered. You guys are awesome 🤙🏽

High quality cooler - much better than original. The installation was a bit fiddly but it all went together properly. Huge $avings compared to OEM parts.

(Updated) It is a great piece. Cheaper than the stock part and works much better. I wish I had bought the added hose for front hard-line replacement. I didn't really know if I should or shouldn't, so I didn't. Turns out, you either need to re-use one of the stock pieces of rubber hose, or buy a new stock one, or replace the whole front hard-line. I wound up buying a new stock piece of hose, which of course cost more than if I had just bought the added hose. As I was reading the install directions, at first it didn't even make sense that we would reuse that stock hose. We were replacing that section so why would be reusing it? Well, it just so happens that the stock piece of hose on one end is shaped well to be used on the other end. I suppose you could also just use a straight piece of hose rather than the stock part. But given the stock piece is shaped well, it does a good job. Unless you replace the whole front hard-line and then you don't need it. I was having a hard time removing the hose support bracket. I was trying to get at it from under the car and wrapping my hand in awkward position and couldn't get it. Then it dawned on me that going at it from the wheel side would be much easier. Of course probably nobody else would have been as dumb as me.