What does the Damond Motorsports PCV Plate do, and what does it offer?

The PCV plate is a fully machined replacement of the factory PCV oil separator plate, with a port machined to accept an OEM Mazda PCV valve and o-ring, as well as two additional large -10 ports, thus allowing you to run a variety of PCV and OCC set-ups. With this latest version we have added a baffle plate to help reduce the amount of blow-by out of the PCV plate.

Incorporating a PCV valve port onto our plate means you are able to maintain the correct amount of vacuum on the crankcase, under all engine vacuum conditions. With the additional ports, you’re now able to easily and cleanly run dual OCC set-ups in whatever configuration that suits your car best to relieve excess crankcase pressure. The PCV valve is held into the the DM PCV plate with a retaining ring, allowing for easier install and removal of the valve.

Each Damond Motorsports PCV plate comes with the following:

Optional extras that can be purchased along with the PCV plate:

This is a must have product no matter if the car is stock or making big power. Ditch that cheap oe plastic plate and replace it with a far superior plate.

P
P.D.
Wonderfully machined, could have used some instructions.

I left a negative review a couple of days ago, which hasn't been posted yet. Turns out it was my ignorance. The kit comes with a stock PCV o-ring and a retaining ring. (I don't actually know if the retaining ring is a stock part or not.) But, I didn't notice those parts in the bag. And I didn't originally notice the parts list on the page. So, I didn't know those parts existed. So, I couldn't understand what was supposed to hold the PCV valve in place. Or, in my case, since I'm using the plug, I couldn't figure out what held the PCV plug in place.

I went looking on this site for a guide and didn't find one. The catch-can kits have instructions that mention the plate and have a sketch of it. But no actual pictures or directions. Thus I had difficulty figuring out where I was going wrong.

So today, I decided to look again at this site just in case there was something I was missing. And eureka, I see the clip in the picture of the product, then see it in the list of parts that come with the kit. I was afraid maybe I inadvertently threw them out since I didn't know they existed, but I found them in the bag with the screws. Eureka!

But when I first see the clip and the plug that it is supposed to hold, I'm just not convinced that it is going to hold it well. I'm afraid the retaining ring might pop out if you push on the plug a little. Well, no, it doesn't. The ring holds it quite well actually!

And ultimately, my difficulty might be the proverbial blessing in disguise. You see, I was originally planning on using a stock PCV valve in my set-up. When I became convinced that the retention system for the stock valve didn't work (even though it did...) I decided to heck with it, I'll get the plug and use higher quality, higher flow check-valves. Now that I know the retention system does in fact work, I could go either way. But I'm now convinced that the higher quality higher flow check valves are what I want.

See picture with plug and ring 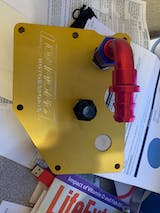 Amazing craftsmanship, the quality is A1. Car didn't blow up